Marilyn's swim across the English Channel 2011

"For me, marathon swimming is the ultimate mental, physical and emotional challenge".

I've always loved swimming. I've been swimming since age 2, competitively since age 13. I'm now 54 and hoping to become the oldest Canadian female to swim the English channel; 33.2 kilometres from Samphire Hoe Beach, Dover, England to Cap Griz Nez, France. I swam Lake Ontario from Niagara on the Lake to Toronto in 1983 and from Toronto to Port Dalhousie (north to south against the powerful Niagara River current) in 1984. I was only the second person to swim Lake Ontario north to south, Diana Nyad being the first. The above quote is one of my favourites, especially since Diana at 61 was also recently trying to prove that older athletes can still achieve big goals.

Why the English Channel? I was quoted in the Toronto Star in 1984 saying my next big swim would be the English Channel. But then life happened, I got married, had 3 boys, but always kept swimming at least twice a week. Last summer, Debbie Bang challenged me to swim 26 kilometres in Muskoka. When I finished it, I felt I could have swum further. When Colleen Shields at 58 breezed across Lake Ontario last August (but was foiled by weather at the very end), I realized I could still do another big swim at my age. Swimmers in Dover say the Channel is the Everest of swims. I'm not so sure, people have accomplished longer and colder swims in other parts of the world. For me, there is something about ocean swimming that is the ultimate. The English Channel is part of world history and swimming tradition. My grandmother lived in England and took me to the beach on the channel, so it is also nostalgia and familiar. What really cemented the idea in my mind is pacing Kim Middleton across the channel in 1989. I just "woke up" last September and realized time was running out.

So I have been inspired and supported by a great many people. (Thank you!) In doing this swim I would like to inspire others to dream big and go out and achieve their goals. But, in this journey I have learned that reaching smaller training goals along the way has also inspired others. Swimming Lake Simcoe from Barrie to Orillia, 35 kilometres in 18 hours and 44 minutes is the biggest example of this, especially since the water was 13 degrees Celsius for the first 3 hours. Even if the channel weather foils me on August 21, 22, or 23, it was worth doing.

I am also pleased to be able to use this opportunity to raise money for the Good Shepherd Centres in Hamilton. They run a network of shelters and services for troubled youth, abused women and children, the dying, the mentally and physically challenged, the hungry and the homeless. They strive to support people through crisis and help them re-establish healthy and productive lives. They have been very good to my patients over the years and for this I am grateful. Please support my swim by donating to the Good Shepherd centres. Thank you. http://www.goodshepherdcentres.ca/News/events.htm

It has come to my attention that my Lake Simcoe swim has not been recognized internationally. I swam it June 25-27, 2011 as a training swim for the English Channel. I swam from Centennial Beach Barrie, to the Huronia Regional Centre in Orillia, a distance of 35.1 km. It was a Solo Swims of Ontario ratified swim. The Swim Master report is available on request. Below is my first hand account of the swim. Pictures are below the English Channel ones.

To learn more about my next swim, go to my new blog site, www.swimcatalina2013.blogspot.ca

June 16, 2012
I conquered Key West!
I swam the 12.5 miles (20.1 km) around the island as part of a US Masters race in a time of 8h 15min.
I'm the oldest female in the last 5 years of online records, not sure about the 12 years before that. I will definitely get the medal for my age group.
They promised it would be a tide assisted race, but the tides were opposite from predicted. It was a tide and wind in your face race. Only the 10th mile was tide assisted and the last 2 were with the wind. The water was 87-88 deg F and the air 80-90. The cloud cover gave us a break from the sun, which kept this northern girl from getting seriously sun burnt. My body held up well despite the large amount of sprinting to keep from going backwards when the tidal current was strong. My hot water nutrition plan also worked out well.
Next swim? I will think about it for a few months. Definitely not a hot water swim.
Posted by Marilyn at 15:13 No comments:

I am pleasantly surprised to discover that my 2011 English Channel swim was features in the Daily News of Open Water Swimming on June 4, 2012  http://dailynews.openwaterswimming.com/2012/06/marilyn-korzekwa-wakes-up-to-achieve.html
and http://openwaterpedia.com/index.php?title=Marilyn_Korzekwa
The article was then picked up by open water pedia.
http://openwaterswimming.com/marilyn-korzekwa-wakes-up-to-achieve-her-dreams/

The Channel Swimming Association finally met and ratified all the swims for the year, including mine. It seems they also awarded me the Endurance award of the year. What a pleasant surprise! Here is what the president of CSA, Mike Read, said about why I got the award.
"The greatest feat of endurance encompasses everything, age, length of swim, weather conditions..........the person who battled on against all odds in spite of what was thrown at them.  The time taken is clearly one aspect, but 20 hours on a flat calm day would not in our view beat 16 hours in a Force 4.  And you had 12 hours in F4 and occasionally F5 and you had 13 hours of a head wind. In our view you had the hardest swim of the year."
Posted by Marilyn at 16:27 No comments:

A month later and sometimes I still can't believe I did it.
People have been asking me to compare Lake Ontario to the English channel. The short answer is that Lake Ontario was harder physically but the channel was harder mentally.
I forgot to mention in the last blog that I saw about a half dozen purple jellyfish about 2 metres down. "Fortunately" because of the high winds, they went deep. There were also about a dozen brown ones on the surface but they were easier to spot and dodge, although sometimes they hid out in the seaweed of the same colour.
I've added a video clip from the afternoon when the winds were starting to settle down but they're probably still over 20 knots. Hope you don't get sea sick watching it.
I just got my chart of the English channel with my route highlighted from my pilot, Kevin Sherman. I photographed it for the blog. The pilot drew in arrows representing the tide. The tide makes everyone's swim route into a series of curves. The wind from the SSW to SW (blowing from the bottom left corner) added some extra curvature to my route! The straight line distance from Samphire Hoe Beach to where I finished in Calais is over 41 kilometers. Official time was 16 hours and 40 minutes.
Kevin enclosed a note, "Well done on your crossing. What a route! Not a short swim but a good one. Your support team done you proud."
Yes, I have been back to swimming in Lake Ontario. The weather the first 3 weeks of September has been too beautiful for me to resist!
Thanks again to all my cheerleaders and supporters.
Its not too late to donate!
Marilyn
Posted by Marilyn at 18:01 No comments: 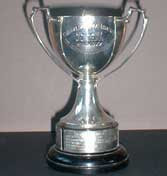 Chart of my swim 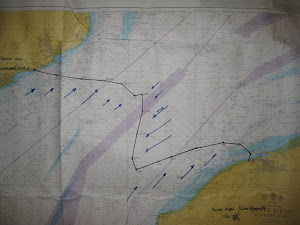 "Not a short swim but a good one", Kevin 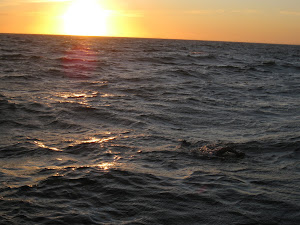 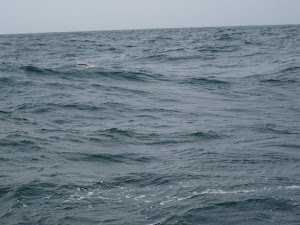 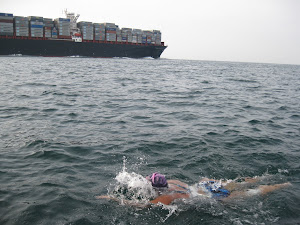 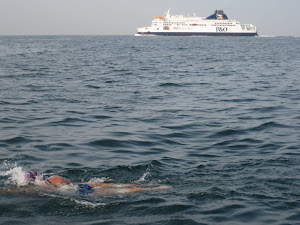 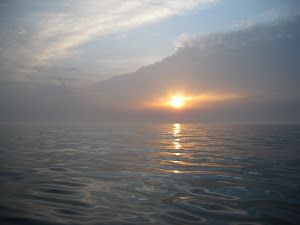 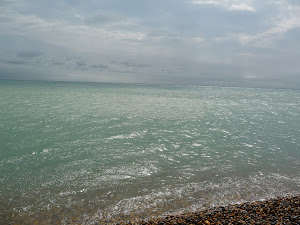 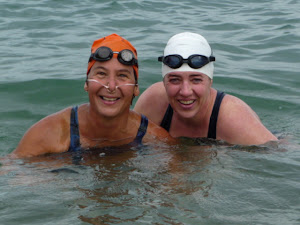 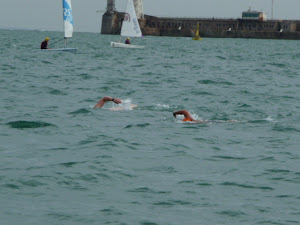 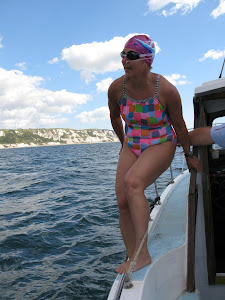 Getting in for trial swim. See the white cliffs? 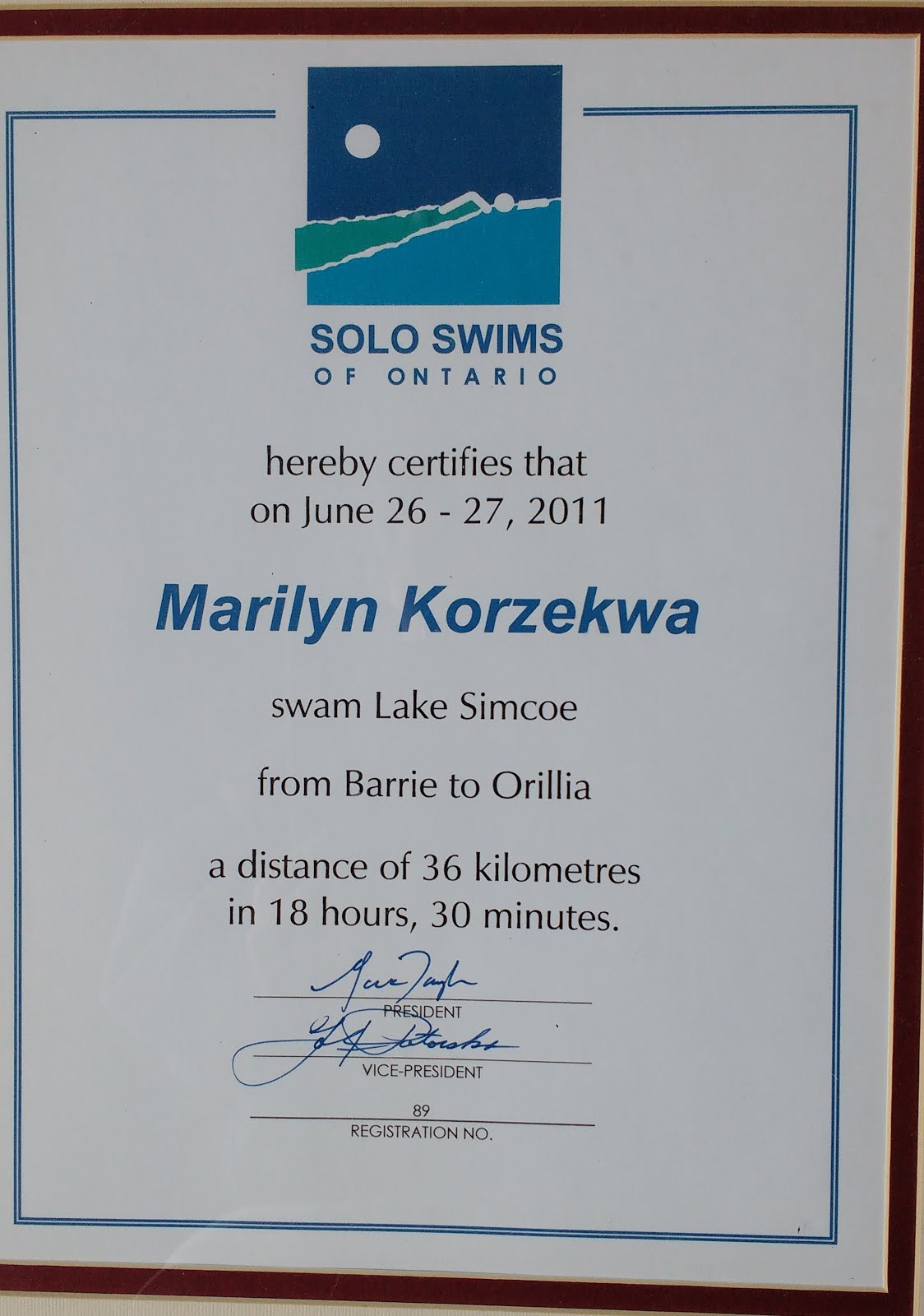 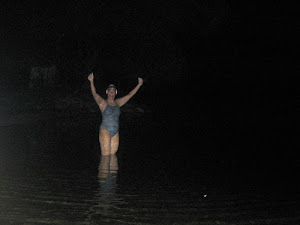 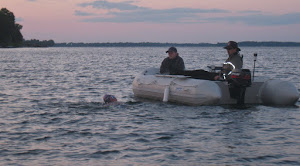 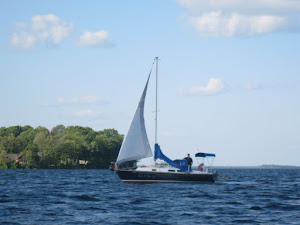 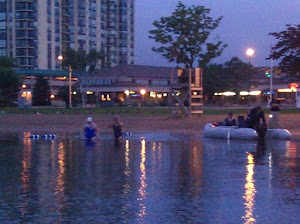